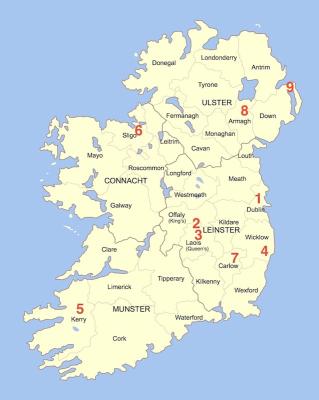 The aim of this website is to present, as far as possible, a complete record of all Meredith families who settled in Ireland from earliest times up to the end of the 19th century, and to trace their descendants in Ireland and other countries. It is a work in progress and will be updated frequently with new information.

The distribution of the Meredith surname in Ireland was highly clustered into distinct geographical regions, as different families with that surname settled in different parts of the country. The family line with the earliest documented ancestry is that of Richard Meredith, who came to Ireland in 1584 as the chaplain to the Lord Deputy, Sir John Perrott, and who was appointed Bishop of Leighlin in 1589.

Other early clusters developed in the counties of Sligo, Wicklow, Laois, Kerry and Carlow, each with a different Meredith ancestor and a distinct lineage. These major family lines have a significant number of descendants, and they are documented separately in the Family Line menu item at the top of the page.

These major family lines are named in this website according to the county in which the earliest ancestor settled - Sligo, Wicklow, Kerry and Carlow - except that

There are other Irish Meredith families who are not part of these major family lines, and for whom only a limited lineage is known. These will be grouped together as "Other Family Lines" in Family Lines as their information is added to the website. Individuals with no known lineage are also included in the website, but their details need to be found through the Search facility.

All the earliest Irish Meredith settlers are thought to have come from Wales, where it was a fairly common name that was originally Maredudd in Welsh. This Schematic Diagram summarises the current understanding of how the major family lines may, or may not, be related - and their possible connections back in early Welsh history.