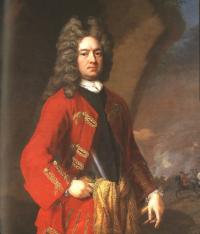 Arthur Francis MEREDITH was born aft. 1706.3 He and Mary WALLER were married in 1732.4
He lived at Dollardstown, Co. Meath, Ireland. His house there was designed for him in 1734 by Richard Castle, and was demolished in 1986, being derelict by then.

Note that there is some confusion in the sources as a result of two cousins Thomas Meredith (sons of Charles Meredith of Newtown and Arthur Meredith of Dollardstown, brothers) each marrying a Catherine and naming a son, Arthur. For example, the History of the Irish Parliament identifies the parents of Arthur Francis as Thomas and Catherine Baldwin.1

John JERVIS-WHITE was born in May 1700 in Ballyellis, IrelandG.1 He and Elizabeth FLEETWOOD were married.2 He and Elizabeth MEREDITH were married in 1724.1 He died on 7 Nov 1769, at age 69.3,4
John Jervis-White lived at Ballyellis, Co. Wexford. The family names of Jervis and White were conjoined by the marriage settlement of his parents. His will dated 14 Jan 1764 (and probated 2 Nov 1769) included the following details:
To wife Elizabeth White ors Fleetwood £300-0-0 yearly pursuant to a power reserved in settlement with first wife Elizabeth Meredyth. To niece Mrs. Grogan - large diamond ring. To godson Cornelius Grogan Esq. a silver scalloped server. To coz. Miss Elz. White Mathew and Jonas[?] White £5-0-0 each. To old hunstman Patk. Caulfield best saddle horse To son Counsellor White 1/- To son Thomas 1/- To daughter Ruckly 1/- To son Edward1/- To son John who has a large family £50-0-0 To nephew John Grogan Esq. all the rest of property in thanks for money lent when creditors were pressing.5,6,7

-?- HAMILTON and Anne MEREDITH were married.

Charles Patrick PLUNKETT and Elizabeth STRATFORD were married.
He was the son of Matthew Plunkett, 7th Lord Louth.1

James TAYLOUR and Catherine MEREDITH were married in 1737.2 He died in 1747.3
He was a Member of the Irish Parliament.4

Mary PARKER and Murrough BOYLE, 1st Viscount Blessington, were married.2 She died on 13 Sep 1668.2
Mary Parker was the daughter of John Parker, Archbishop of Dublin.