Dorothy Lilian HAYWARD and Maurice Willoughby TWEEDY were married on 14 Feb 1911 in All Saints Clifton, Bristol.

Ernest Percival BEARD was born ca. 1873. He and Elizabeth Margaret TWEEDY were married on 23 Apr 1908 in St. Luke’s Chelsea, Lndon.

John Henry KINCAID and Sidney Margaret BOND were married on 2 Jun 1870 in Dublin.

Martin CLANCY was born in 1815. He and Mary CARTY were married. He died in 1899, at age ~84.
The family lived in Ballygrania, Collooney, County Sligo. 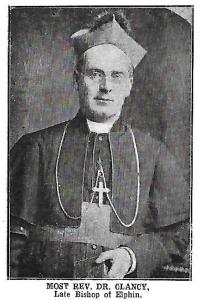 John Joseph Clancy (1855-1912)(Courtesy of Evelyn McCadden)
Most Rev. Dr. John Joseph CLANCY was born on 23 Dec 1855 in Ballygrania, Collooney, Co. Sligo.1 He was baptised on 28 Dec 1855 in Taunagh, Sligo, Ireland.2 He died on 19 Oct 1912, at age 56, in St. Mary’s Presbytery, Magheraboy, Sligo.3
He was ordained as a Priest in 1882 and the following year he was appointed professor in the Diocesan College, Sligo. In 1887 he was appointed professor of English Literature and French in Maynooth College, which office he held until he was made Bishop of Elphin in 1895 at the early age of 39. He was the brother in law of James MEREDITH of Cloonamahon.

The Dictionary of Irish Biography describes him as a popular figure, devoted to the poor (establishing a home for the destitute in 1910), and considering education the answer to poverty. He erected and renovated a large number of national schools in Sligo and Roscommon and set up higher-grade schools for the poor of the larger towns of his diocese; he also developed courses at the diocesan college, tailored for the underprivileged through a system of open competition. However, the main thrust of his work lay in the promotion and establishment of technical schools. He was renowned for his skills as an orator, which led to the creation of a new chair of sacred eloquence at Maynooth. His talent was in much demand on special ecclesiastical occasions.

Note: many online sources (including the Irish Dictionary of Biography and his obituary below) give his date of birth as 23 Dec 1856. However the parish records clearly show that he was baptised in 28 Dec 1855, so he was presumably born on 23 Dec 1855.

---START---
DEATH OF MOST REV DR. CLANCY.
DISTINGUISHED _PRELATES CAREER.
The death occurred at the Palace, Sligo on Saturday night, at 8 o'clock, of the Most Rev. Dr. Clancy, Bishop of Elphin, whose health for some time past gave cause for deep anxiety. Though his illness was altogether of over a year's duration, the end was not expected until within the past couple of weeks, and while his Lordship lay in extremis the whole diocese was plunged in grief, for Dr. Clancy was beloved as a gentle and saintly prelate. The sympathy of all Irish Catholics are with the people of the diocese in their loss, and with the Hierarchy and clergy on the passing of a great churchman and kindly comrade.
He was born at Sooey, Rlverstown, Co. Sligo, on December 23, 1856, and at an early age he was sent to the Marist Brothers' School, Sligo, where he soon displayed remarkable talent, showing marked proficiency in such subjects as English composition and literature — branches of learning in which he afterwards highly distinguished himself. During the four years he spent at the Marist Brothers' School it was made manifest that his bent was in the direction of the priesthood. He was next sent to the Diocesan Seminary, Summer hill, Athlone, where he displayed still further that remarkable talent of which he gave such conspicuous evidence while at the Marists' School, so much so, indeed, that the authorities recommended him as qualified for the philosophy course, and he was accordingly received into the Logic class at Maynooth. While a student at the famous College, he was privileged to frequently attend in the chapel of his native parish on Sundays to teach Catechism to some of the children, where he himself, as he said on the occasion of his consecration as Bishop, lisped his first fervent prayer.

SCHOLARLY ATTAINMENTS.
His college career at Maynooth was a brilliant one. Having spent two years in the Dunboyne establishment in further study of theology, Canon Law, Scripture, and Hebrew, he was received into the priesthood, which had been his ambition from his early youth. "It was from the circulating library at Sooey," he afterwards stated, "that I was accommodated with the book which made the deepest spiritual impressions on my soul, and gave me my first predilection for the priesthood."
Father Clancy left Maynooth College in 1883 to take charge of the Diocesan Seminary of Elphin, which at this time had been removed to Sligo. With a deservedly high reputation as a scholar, he was specially selected for this position, as the authorities were anxious that the Seminary should be amongst the first of its kind in the country. Here Rev. Professor Clancy laboured about four years, when he was unanimously selected by the Maynooth authorities to fill the Chair of English Literature in St. Patrick's College. From thence until he was chosen as the successor of the late Most Rev. Dr. Gillooly he laboured as Professor at Maynooth. In the Instruction which he imparted to the students the Rev. Professor Clancy devoted special attention to perfecting them in pulpit oratory, for he always maintained that effective preaching was one of the chief means towards ensuring the perseverance of the good and the reform of the wicked.

PULPIT ELOQUENCE.
So great was his success in this department that the Bishops of Ireland, at a meeting held about 1893, decided to create a separate class for the study and practice of pulpit eloquence, in charge of which they placed Father Clancy. As Professor of Sacred Eloquence he achieved great success. As a preacher himself, the late Dr. Clancy acquired great fame, so much so indeed that his services were much sought after by prelates and priests throughout the country for sermons on special occasions. His was not only a brilliant career, but he had shown many practical qualities as a Professor and as an administrator. Hence a short time before the death of the Most Rev. Dr. Gillooly, Dr. Clancy was appointed Coadjutor. Before his elevation to the See of Elphin, Dr. Clancy carried his great piety and learning far outside the College walls, for at various periods he conducted missions or retreats in country parishes.
The selection of Dr. Clancy as Bishop of Elphin was a most popular one, and the occasion of his Consecration on Sunday 24th March, 1895, was one of general rejoicing throughout the diocese. The ceremonies took place in the Cathedral, Sligo and were attended by nine prelates, the consecrating prelate being the Most Rev. Dr. McEvilly, Archbishop of Tuam, the present Archbishop of Tuam, the Most Rev. Dr Healy, who was then Coadjutor Bishop of Clonfert, being one of the assistant Bishops of the Throne.

A HIGH TRIBUTE.
The sermon was preached by the Rev T. A. Finlay, S.J., who said, in the course of an eloquent address, that in the seclusion of his College life the new Bishop of Elphin had had the opportunity to make acquaintance with the tendencies of the time, and had learned to know society, and estimate its relation to the Church, and to appreciate above all "that social problem which has gradually risen up before the Church and society, and with which both must deal. He had had the opportunity and used it to cultivate in perfection his own gifts of mind and character, and to develop largely sympathies with his fellow-countrymen, the poor especially. Herein lie the best human guarantees that his rule over the diocese of Elphin will be worthy of the mission of the Christian Bishops to modern society, and worthy also of the inspiring traditions which hang round the See, of which he has to-day become the occupant."

WORK FOR EDUCATION.
The late Dr. Clancy, who had been an examiner under the Intermediate, paid close attention to the work of forwarding the interests of education in his diocese which had been carried on most successfully by his predecessor, Dr. Gillooly. The late Bishop also took a deep interest in promoting the material welfare of his people, and was a kind and generous friend to the poor. He took a keen interest in the All-Red Route (Blacksod) scheme, and was one of a deputation that proceeded to Canada to forward its claims. It will be remembered that recently when a social upheaval was threatened in Sligo by means of a strike of the transport workers, Dr, Clancy took occasion to publicly denounce the efforts of the strike leaders to bring trouble to the workers, and warned the people against the efforts to spread Socialism in their midst. In this direction his wise counsels prevailed, and what threatened to be a serious labour trouble was averted.
The late Dr. Clancy was an ardent Nationalist, and was a generous subscriber to the funds of the Irish Party. He did not, however, favour extreme measures in politics. On the occasion of his Consecration in reply to an address from the people of his native place, he said:— "I have no hesitation in assuring you that in your struggle for amelioration of our common country, as long as you confine your action within the limits of rectitude you shall have my sincere sympathy and earnest co-operation."
----END---.4

Sir Frederick Grant BANTING was born on 14 Nov 1891 in Simcoe County, Ontario, CanadaG. He and Marion Wilson ROBERTSON were married in 1924. He and Henrietta Elizabeth BALL were married in 1937. He died on 21 Feb 1941, at age 49.
He was a medical scientist, physician, painter and Nobel Laureate.

He was awarded the Nobel Prize in Physiology or Medicine in 1923 with John James Rickard Macleod for their discovery of insulin and its therapeutic potential.

The annual Banting Lectures are given in his honour and delivered by an expert in diabetes.

He died from wounds following the crash of an aeroplane in which he was a passenger.

A series of podcasts on the Life and Times of Sir Frederick Banting is available here.

Emma Lena KNIGHT was born in 1889. She and William Thompson BANTING were married on 6 Apr 1910 in Simcoe County, Ontario, CanadaG. She died in 1963, at age ~74.
She was the daughter of William Knight and Bertha Hender.