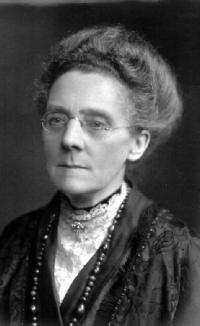 The extent of her achievements are summarised in her obituary in the Lancet (March 8th, 1941, pp 333/4):
“Amongst pioneer medical women Dr. Sarah Gray  will have an honourable place. Born in Tipperary  she determined on a medical career at a time when, for a woman, such a course was still considered eccentric, if not improper. She studied in London, but London granted no degrees to women, so in 1888 she took the Scottish conjoint qualification.

Three years later she settled down in Nottingham, the first woman to undertake general practice. Opposition was bitter, nor was it made less so by her very patient ability. Women doctors were not wanted, except perhaps by women; certainly not by the profession. The first years were bleak and discouraging. Nevertheless, in 1899 she was elected to her first public appointment. At the Women's Hospital, Nottingham, she became assistant surgeon in charge of outpatients, and, as it was then called, chloroformist.

Her advent was viewed by most of her colleagues with distrust. For a whole year one of them insisted on being present whenever she administered an anaesthetic, eager to discover and proclaim some negligence or inefficiency. She disappointed him. And worse was to come. She applied for the post of consulting surgeon in charge of inpatients. Her suitability could not be questioned, yet some excuse had to be found for keeping her out. She was told that her qualifications, the highest open to women when she took them, were not high enough. Nothing daunted, at the age of forty, she took her F.R.C.S.I. The opposition was cowed, and in 1902 she became one of the two most highly qualified members of the staff. She became surgeon to the Nottingham and Nott’s Convalescent Home, medical examiner to the Board of Education and the Nottingham Education Committee, where her outstanding ability and her sense of duty failed to convince she carried the day to day warm sympathy, her sense of humour, her volcanic energy, her Irish brogue, or her golden voice. She even mastered the early motorcar.

In the year 1921-22 she was elected the first, and up to that present time the only, woman president of the Nottingham Medico-Chirurgical Society. She could, and did, laugh at her difficulties. She had gained her rightful place. She had many interests in the city where she practised for 37 years. Temperance, foreign missions, rescue work, social reform in all aspects, were sure of her sympathy and help. She was an eloquent speaker, and contributed to articles to the medical press. Her life was rich and full and her loss will bring grief to many.”.3

Frances Ralph Gray (1861-1935)
Frances Ralph GRAY was born on 9 Jul 1861 in Ireland. She died on 10 Nov 1935, at age 74, in England.
From Women at Queen Mary Online (http://www.women.qmul.ac.uk/virtual/women/atoz/gray.htm):
"Frances Ralph Gray (c1863-1935) was educated at Plymouth High School. She went on to study at Newnham College, Cambridge, where she took the Classical Tripos in 1883.
In October 1883, she became Resident Lecturer at Westfield College, becoming the second member of staff to join the College.
Gray was in charge of the College library, and sometimes disagreed with Constance Maynard on the books that it should contain. Maynard believed the collection should contain not 'what girls may read, and many had better not, but rather all they ought to read'. Gray believed there should be books that 'really educate', and which were more current and being debated, like George Eliot's Adam Bede.
Gray was instrumental in founding the Westfield College Association, which was established in 1900, and of which she was president from 1928-1931. She was also a member of the College Council from 1897-1929.
In 1894, Gray left her Lecturer post at Westfield to become Headmistress of St Katharine's School in St Andrews. And 1903, she moved on to become First Head Mistress of St Paul's School, where she remained until 1927.
She was committed to women's education throughout her career, and was president of the Association of Headmistresses from 1923-1925."

She was made a Justice of the Peace in 1920 and received an OBE in the 1926 Birthday Honours of King George V.