Andrew CLARKE was born on 16 Dec 1896.1 He and Bridget Christina MEREDITH were married in 1921 in Barrow-in-Furness Registration DistrictG.

Ada Florence CLARKE was born in 1921 in Dublin, IrelandG.
For further information see the citations below.1

Alexander MEREDITH was born in 1922 in Barrow-in-Furness Registration DistrictG.1 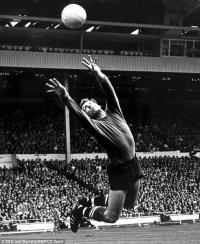 Harry Dowd (1935-2015)
Courtesy: Daily Mail
Henry William ('harry') DOWD was born on 4 Jul 1938 in Salford, Lancashire, England.1 He died in Apr 2015, at age 76, in Salford, Lancashire, England.1
Harry Dowd was a well-known footballer who played in goal for Manchester City. His obituary in the Manchester Evening News read as follows:
“Manchester City legends have led the tributes to their former team-mate Harry Dowd, who has died aged 76.
The respected goalkeeper was an FA Cup winner with the Blues, making 181 appearances during a nine-year Maine Road career, before playing for Stoke City and ending his playing days at Oldham Athletic in 1974.
Salfordian Dowd started his career at City aged 20 in 1958, signing as an amateur before turning professional two years later. His debut came in a 4-1 defeat to Blackburn Rovers when he came into the squad to replace the injured Bert Trautmann.
Remembered fondly for his joint save along with Tony Book’s block to deny Newcastle’s Keith Dyson en route to the 1969 FA Cup final, which City won against Leicester.
Dowd inherited the No.1 jersey from the legendary Trautmann and held it until the emergence of Joe Corrigan almost a decade later.
In February 1964 Dowd scored an equalising goal for City against Bury after he switched from goal to centre-forward after he broke his thumb. That game also provided a debut for Bury for Colin Bell, later a Blues team-mate.
During Dowd’s time at Stoke City in a two-month loan spell, he was reserve to the great Gordon Banks.
Former City player Fred Eyre said: “Harry was one of the most popular at the club, we all used to love Harry. He was a great goalkeeper.”
Eyre, who knew Dowd when he worked as a plumber, said: “When we had training he would come over and train with the team, and then afterwards he would go straight back to work.
“It came as no surprise to us when Harry was always the first picked whenever we played five-a-side in training. We always wanted to be on his team.”
He added: “ He was one of the fittest men at the club. Everybody loved him.”
Eyre spoke as he was gathered with former City players, Glynn Pardoe, Ron Healey, Johnny Williamson and fellow former goalkeeper, Steve Fleet.
Fleet commented: “It’s a very sad day for all of us. He was a lively goalkeeper and he had a wonderful career when he was at City and then at Oldham.”
Another former Blues stopper Ron Healey added: “He was a terrific goalkeeper, so underrated and very agile. He was a smashing lad and he will be sadly missed.”
Harry is survived by children after his wife Rita died in 2011.”.2

Robert MEREDITH was born ca. 1831. He and Mary Jane GROGAN were married on 15 Dec 1853 in Ballymore Parish Church, Co. Armagh. He and Catherine BEST were married on 29 Sep 1891 in Ballymore Parish Church, Co. Armagh.1 He died on 25 Jun 1893 in Mullantur, Tandragee, Co. Armagh.1
He was variously a Carpenter, Farmer and Merchant. He lived at Springfield House near Tandragee. He was the executor of the will of his uncle George Meredith of Poyntzpass. His will dated 22 Dec 1892 was proved on 21 Sep 1893.

He is thought to be the Robert Meredith, Wheelwright, aged 18, enumerated as the brother of Joseph Meredith in Manchester in 1851.2

Mary Jane GROGAN was born ca. 1833. She and Robert MEREDITH were married on 15 Dec 1853 in Ballymore Parish Church, Co. Armagh. She died on 17 Aug 1883 in Springfield House, Tandragee, Co. Armagh.1
She was the daughter of Charles Grogan, a Shoemaker.

William John MEREDITH was born on 17 Jun 1864 in Mullantur, Tandragee, Co. Armagh.1 He and Sarah Bell CAMPBELL were married on 9 Jun 1896 in First Portadown Presbyterian Church, Co. Armagh. He died on 9 Jul 1927, at age 63, in Springfield House, Tandragee, Co. Armagh.2
His obituary was reported in the Belfast News-Letter (11 July 1927, pg 11):
“The death occurred on Saturday of Mr. William J. Meredith, or Tandragee. Deceased who for the greater part of his life carried on business in Tandragee aa a pharmaceutical chemist and grocer, retired from business some time time ago owing to ill-health, and resided until his death at Springfield House.
He was a member of the Tandragee Urban Council for many years, during which any project for the improvement of the town had his hearty support.
A member of the Church of Ireland, Mr. Meredith regularly attended the services in Ballymore Parish Church until prevented by illness. He held various offices in the Church, and everything that tended to the welfare of the perish had his practical sympathy. In politics he was a staunch Unionist.
A strong swimmer and excellent shot, he displayed all the qualities of a sportsman, and did much to encourage the development of manly games amongst the youth of the district.
He was prominently identified with the Masonic Order, being a member of the Provincial Grand Lodge et Ireland, and a P.M. and P.E.K. of Union Masonic Lodge No. 105, Tandragee.
Deceased, who was in hie 63 year, leaves a widow and five sons to mourn his loss."