Lilly Anne BIRNEY was born ca. 1826 in Ireland. She and George Thomas MEREDITH were married on 10 Sep 1857 in Ballymacormack Church, County Longford, IrelandG. She died on 30 Aug 1902 in Dublin, IrelandG.1
She was the daughter of George Birney of Longford, Assistant Commissary-General. She was living at 33 Mountpleasant-square, Rathmines at the time of her death in 1902.1

Frances Alice MEREDITH was born on 29 Oct 1858 in Drogheda, IrelandG.1 She and Harry Vere Dawson WHITE were married on 2 Sep 1879 in Skyrne Parish Church, Co. Navan, Ireland, witnesses Mary Lucy White, B. Newport White, G. Meredith.2 She died on 1 Dec 1945, at age 87.
Harry Vere Dawson White and Frances Alice Meredith had 8 children, with 5 still living at the time of the 1911 census.3

Elizabeth MEREDITH was born ca. 1860 in Co. Louth.1 She died on 13 Jan 1909.2
Elizabeth Meredith was enumerated in the 1901 Ireland census in the household of her mother Lillias Anne Meredith in Mount Pleasant Square, Dublin.1

Charlotte Sophia MEREDITH was born on 27 Sep 1865 in Ludlow Street, Navan, IrelandG.1,2 She died on 29 Sep 1886, at age 21, in Trimgate Street, Navan, Co. Meath.3
Cause of death: Scarlatina.
For further information see the citations below.4

Harry Vere Dawson WHITE was born on 16 Dec 1853 in Co. Dublin, Ireland.1 He and Frances Alice MEREDITH were married on 2 Sep 1879 in Skyrne Parish Church, Co. Navan, Ireland, witnesses Mary Lucy White, B. Newport White, G. Meredith.2 He died on 20 Jan 1941, at age 87.
Harry Vere Dawson White was the Bishop of Limerick, Ardfert and Aghaboe. His obituary appeared in the Weekly Irish Times in 1941:

THE RIGHT REV. H. VERE WHITE, D.D.
The Church of Ireland has lost one of its most distinguished and popular bishops by the death, which took place on Monday at 4 Ailesbury road, Dublin, in his 88th year, the Right Rev. Harry Vere White, D.D. former Bishop of Limerick, Ardfert and Aghadoe.
Born in 1853, he was the son of the Rev. H. Vere White, a well-known Dublin clergyman. He received his early education at the Academic Institute, whence he proceeded to Trinity College. He obtained his B.A. degree (Sen. Mod, Ethics and Logics) in l876; Divinity Testimonium, 1877 ; Eccles. Hist. Prize (First), 1874; M.A., 1881; B.D. and D.D. in 1921.
In 1878 he was ordained for the Curacy of Ardbraccan, and the following year accepted an appointment in New Zealand. Later he returned to Ireland, and again took up work in the Church of Ireland. From 1885 to 1888 he was Rector of Almoritia, and from the latter year to 1894 Rector of Killeak. For seven years he was Secretary of the Society for the Propagation of the Gospel in foreign parts, and from 1894 to 1901 he acted as Secretary to the Incorporated Society. Dr. White was also Treasurer and Chancellor of St. Patrick's Cathedral, Chaplain to the Lord Lieutenant, and Honorary Chaplain to the Archbishop of Dublin. For thirteen years he was Vicar of St. Bartholomew’s Church, Elgin road. Dr. White was most popular in this important parish. The weakness of his voice prevented the excellence of his discourses from being appreciated as much as they merited; for they were always full of thought and highly instructive.
Dr. White was Archdeacon of Dublin from 1917 to 1918, when he was elected to the Deanery of Christ Church Cathedral in succession to Dean Walsh. He was a member of the General Synod since 1909, and received a large measure of support when the Archbishopric of Dublin became vacant. However, the choice fell on a much younger man in the person of Dr. D'Arcy, afterwards Archbishop of Armagh and Primate of All Ireland.
In 1921 the Right Reverend Dr. Orpen resigned the Bishopric of Limerick owing to his advanced age and Dr. White was chosen as his successor. To succeed Bishop Orpen was a matter of no small difficulty, as, without wishing to draw any invidious distinction, he was the most sincerely-loved bishop in the Church of Ireland. The two, however, had much in common. They both came from the South of Ireland and were equally broad-minded, and lived on the friendliest terms with the members of all other denominations. Dr. White was essentially a scholar and a gentleman, and made no enemies, avoiding all controversies, either religions or political. His leading characteristic was the possession of sound common sense combined with a unique knowledge of human nature. He was three times Select Preacher before the University of Dublin and wrote a variety of tracts on the lives of Bishop Inglis and Bishop Berkeley and on other subjects. He was valued, however, more for his wisdom in affairs than for any profound learning or gift as a writer.
In 1879 Dr. White married a daughter of Mr. G. T. Meredith, and two of three sons gave their lives in the Great War—Captain Hill W White, R.A.M.C, in 1918, and Lieutenant Gerald White (1916).
Dr. White resigned the Bishopric of Limerick in October, 1933, exactly twelve years after his enthronement.
On the occasion of the celebration by Bishop White and Mrs. White of the diamond jubilee of their wedding in September, 1939, they received a letter from the King and Queen conveying “sincere congratulations and bent wishes, together with the hope that they might, be long spared to each other."3

Charles George MEREDITH was born ca. 1861 in Co. Louth, Ireland. He and Agnes Louisa KINGSCOTE were married on 11 Aug 1890 in Church of St. Joseph, Spiddal, Co. Galway, IrelandG. He died on 15 Dec 1916 in Adelaide Hospital, DublinG.1,2
Charles George Meredith was a District Inspector in the Royal Irish Constabulary. He enlisted aged 21.
For further information see the citations below.3

Agnes Louisa KINGSCOTE was born on 23 Dec 1870 in Ireland.1 She and Charles George MEREDITH were married on 11 Aug 1890 in Church of St. Joseph, Spiddal, Co. Galway, IrelandG. She died on 16 Apr 1947, at age 76, in Duncan, British Columbia, CanadaG.1
Agnes Louisa Kingscote was the daughter of Major Fitzhardinge Kingscote and Agnes Grant Stuart. Fitzhardinge Kingscote was the son of Thomas Henry Kingscote who had married twice. His 1st wife was Lady Isabella Anne Frances Somerset, daughter of Sir Henry Charles Somerset, the 6th Duke of Beaufort. His 2nd wife (and mother of Fitzhardinge) was the Hon. Harriott Mary Anne Bloomfield, daughter of Lt.-Gen. Sir Benjamin Bloomfield, 1st Baron Bloomfield of Oakhampton and Redwood. Agnes Grant Stuart was the daughter of John Stuart, who was born in 1808 in Brockville, Canada. His father (also called John) was Sheriff of the Johnstown District, Upper Canada between 1814 and 1829. Agnes Louisa’s parents were married in Canada.1
For further information see the citations below.2 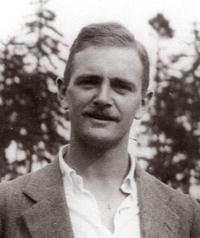 Charles James MEREDITH was born in 1869 in Alverstoke, HampshireG. He and Catherine Adele SMYTH were married on 29 Apr 1894 in Waterford, IrelandG. He died on 7 Jul 1913, at age ~44, in Cape Town, South AfricaG.1
Charles James Meredith and Catherine Smyth are assumed to be the Mr Meredith (aged 25) and Mrs Meredith (aged 23) who left Southampton on 12 May 1894 on the ship "Lismore Castle", bound for the Cape.
For further information see the citations below.2 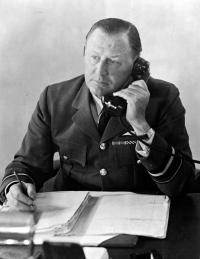 Charles Warburton Meredith (1896-1977)
Photo: Wikipedia
Sir Charles Warburton MEREDITH was born on 23 Aug 1896 in Wynberg, South AfricaG.1,2 He and Honoria Druce DAVIDSON were married on 28 Aug 1926. He died on 19 Apr 1977, at age 80.
He was a South African air force pilot, and Air Officer Commanding of the Rhodesian Air Training Group during the Second World War, when he was promoted to Air Vice-Marshal. He was appointed a Knight Commander of the Most Excellent Order of the British Empire (KBE) in 1947.

According to his entry in Who was Who, Air Vice-Marshal Sir Charles Warburton Meredith, KBE, was the son of C. J. Meredith; it is assumed that this is Charles James Meredith.

Catherine Adele SMYTH was born ca. 1871. She and Charles James MEREDITH were married on 29 Apr 1894 in Waterford, IrelandG. She died on 22 Oct 1938 in Oudtshoorn, Western Cape, South AfricaG.1,2 She was buried in Western Cape, Oudtshoorn, Condor street, Main cemeteryG.
Catherine Smyth was the daughter of William Smyth, an engineer.
For further information see the citations below.3

Honoria Druce DAVIDSON was born on 9 Mar 1901.1 She and Sir Charles Warburton MEREDITH were married on 28 Aug 1926. She died in 1978, at age ~77, in Camden Registration District, London.1
According to her husband’s entry in Who was Who, Honoria Druce Davidson was the daughter of J. T. Davidson. Her entry in "South African Woman's Who's Who" (1938 edition, p.457) reads:
"Meredith Mrs. Honoria Druce wife of Major C.W. Meredith A.F.C. General Staff Officer of the Cape Command, Capetown. Daughter of J.T. Davidson. Born at Komgha E.P. and educated at the Huguenot Seminary and the Huguenot University college, Wellington, C.P. where she took her B.A. degree, and also holds the Licentiate degree for the piano. Prior to her marriage she was employed in the Government Service. Has one son, Ian, and one daughter, Ann Shirley. Favourite recreation and hobby is tennis. Member of the Kelvin Grove Club. Her address is Wynberg Camp C.P."

Ian Davidson MEREDITH was born in 1927 in Andover, EnglandG.1 He died on 13 Mar 1951, at age ~24, in Nicosia, CyprusG.1
Ian Davidson Meredith was a Flying Office in the Royal Air Force. He was unmarried.1

Kate PALMER was born ca. 1842 in Ireland. She and Charles Warburton MEREDITH were married on 15 Nov 1863 in Alverstoke, HampshireG. She died on 20 Aug 1891 in Daisy Terrace, WaterfordG.2
She was the daughter of James Palmer.

Charles SMITH was born ca. 1900 in Scotland. He and Cecilia Creighton MEREDITH were married in 1928 in Boston, MassachusettsG.

George Fitzhardinge MEREDITH was born on 10 Nov 1891 in Delvin Registration District, Ireland. He and Maud Susan SOUTHGATE were married on 19 Sep 1920 in St. James’s Church, Edmonton, MiddlesexG.1 He died on 6 Nov 1962, at age 70, in British Columbia, Canada.2
George Fitzhardinge Meredith was an engineer.1
For further information see the citations below.3

Thomas Joseph MEREDITH was born on 6 Dec 1894 in Galway district, IrelandG.3 He and Marjorie K. McDONNELL were married on 10 Oct 1923 in Victoria, British Columbia, CanadaG.4 He died on 6 Aug 1980, at age 85, in Campbell River, British ColumbiaG.5